I can feel the grin spread across my face as I sit here mentally categorizing all of the things I love about Halloween. I know it’s become a heavily commercialized holiday, and all of the ways in which we celebrate are perversions of its true meaning. But blah blah blah I don’t care. I like it this way! I like that it’s an excuse for kids to run around the neighbourhood hyped up on sugar and begging for candy from strangers like starving mongrels. I like that my need to binge on cheesy old horror movies is enabled by almost all of the channels on t.v. for two weeks of the year. I love that I can get belligerently drunk while wearing a hilarious costume. I love the decorations, the ghouls, the pranks, the candy, and all the mischief that’s afoot.

Most importantly though, I love that this holiday has absolutely nothing to do with love, peace on earth, romance, gift exchanges, or gratitude of any kind. This isn’t some bitch ass little holiday where we’re supposed to tell each other how we feel and play nice with one another for the sake of the holidays. This isn’t the kind of holiday that forces you to take a long hard look at yourself and overanalyze the nature of your relationships and personal goals, or think too hard about what you’re doing with your life. You’re too busy handing out candy and trying to scare people to be bothered with all that garbage.

Halloween is hedonism in its most pure form, and that is something I can really get down with. It’s a time to let your imagination soar! To come up with the most creative costume, to have the most intense and riveting display of decorations, to eat gluttonous amounts of candy unabashedly! What other holiday simultaneously encourages you to stay out all night terrorizing the neighbourhood, or pass out early with candy wrappers littering your chest in front of the television? You can have your fun-size Mars bar and eat it too!

The only aspect of Halloween that I have disdainful feelings towards is the part where girls dress like sluts. Costumes are about being creative, funny, charming, spooky, and/or clever. They’re not about putting on a thong and a pair of wings and calling yourself a frickin’ butterfly or something equally stupid. And don’t get me wrong, it’s not that I have a problem with people showing off their bodies. More power to you if you’ve been lucky enough to get a hot one. But why does it have to be on Halloween? Why can’t you be brave enough to dress like a slut on any other normal day of the year?

I realize a lot of people are out to get some on Halloween, which is probably a huge factor when deciding to put on that slut-bag costume. But do you think you’re not as likely to score in a slightly more modest costume? Maybe if you aim to look glamorous, beautiful, or cute as opposed to cheap you’ll wind up in a costume that is still flattering to your figure, but doesn’t garner negative attention from your peers. Added bonus: you get to go home with your dignity intact!

Less is not always more with costumes. Physical attractiveness fades in time, and an awesome personality is for life. The earlier you start cultivating that winning personality, the better off you’ll be.

That rug really tied the room together, man! Halloween 2011

And this year’s costume was no exception! 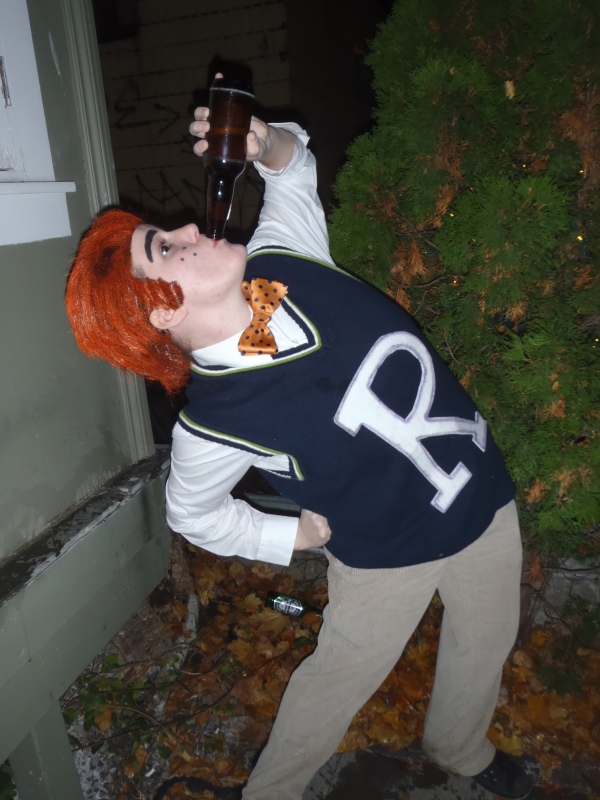 The people we talked to at the party and ran into while cruising through the city really dug our costumes. We got a lot of compliments and laughs because people love to see something they don’t expect. It’s refreshing to see a girl go silly instead of skanky.

It also didn’t hurt that we were hanging out with these jokers all night:

By the end of the night the scoreboard read: 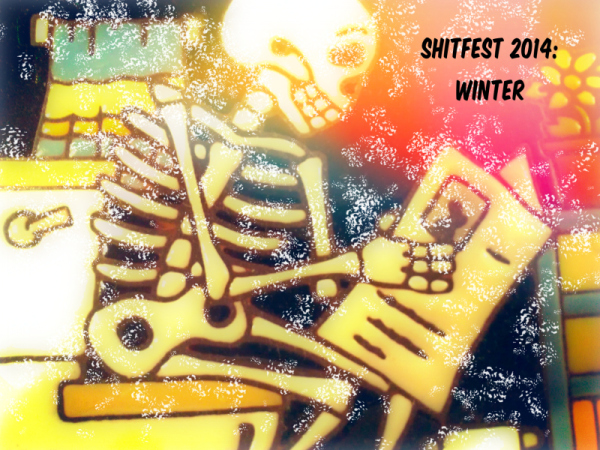