Once in a while we get to enjoy a little perk or two courtesy of D’s work. He’s got connections, man. He recently came into a package of V.I.P. tickets to the newest exhibit at The ROM (pronounced like CD-ROM), otherwise known as The Royal Ontario Museum. Fun, right? We live in this wonderful city with all kinds of interesting things to do, but so rarely do we actually do any of those things. We were pretty excited to take advantage of an opportunity to spend a day exploring the museum.

As per our chums over at Wikipedia, the ROM was established in 1912 and opened the doors to the public in 1914. It’s one of the largest museums in North America, home to an extensive collection of fossils, minerals, art, and artifacts. It’s a veritable hive of knowledge.

This is how a museum should look

The only thing I dislike about the ROM is the horrendous renovation that was made to  the front entrance back in 2007. It’s called The Crystal and it’s this enormous, oddly shaped mass of aluminum and glass that juts out of the building at an arrogant angle. I did not take any pictures of it, because frankly, it isn’t worth the effort. But if you’re interested in checking it out you can do a quick google and you’ll see what I’m talking about. It is a total eyesore. It just doesn’t feel right, and I hate it. Unfortunately though, you have to use that entrance to get in. Puke.

On Saturday afternoon we made the trek to the museum. A burst water main at Bloor/Yonge station meant we had to take the long way around to get there, but we didn’t mind. It meant we got to get off at Museum station, my favourite of all the subway stations. If I had to guess, I’d say that Museum station has experienced the fewest instances of hobo piss compared to all of the other stations. It just seems like it commands more respect than all of the others. It’s special, and deserves to be appreciated.

It makes me feel all adventurous

And it’s cool because it’s got all these great fake statues and ancient looking columns lining the platform. When I walk along the Museum station platform I like to pretend that I’m on a grand adventure, exploring some previously undiscovered pharaoh’s tomb and looking for forgotten treasures. This little bout of pretend really helped me get in the right mindset for a day at the museum.

You wouldn’t dare piss on something as special looking as this, would you?

We had tickets for all of the regular exhibits as well as the latest one called Mesopotamia: Inventing Our World. It was cool, but it was way too crowded. We could barely see anything because all of the displays had people totally surrounding them. Seemed like everyone and their uncle wanted to check out old Mesopotamia last Saturday. The other problem we had is that we’re both short. And I’m a shover too, but I do try not to be quite so quick to shove when I’m out at nice classy joints like the ROM. Instead, I politely skimmed my eyes over whatever it was that I could possibly see while gliding through the exhibit fairly quickly. It was hot and sticky with all those people crammed in there, I just wanted to get out already. We actually enjoyed that exhibit least of all, ranking it last place overall compared to everything else we saw. The best part of any museum is clearly the dinosaurs!

View from up above the main foyer

Everyone loves dinosaurs. They’re big and awesome and exciting. Playing Jurassic Park when we were kids was always super fun. What’s not to love? The best part of the displays are the renderings beside each skeleton that tell you which parts of the display are actual fossils and which parts are recreations.

Obviously I had to get some shots of the T-Rex

Thankfully we didn’t experience any sort of sit-com type scenario where one of us sneezed and accidentally knocked over a T-Rex in front of a bunch of dumbfounded onlookers. I was a little bit worried that something like that could happen, I’m not gunna lie. I mean, it happened in pretty much every T.V. show that ever did an episode involving a museum so it seemed like the odds were high.

D liked the dinosaurs a lot too, but he said that his favourite part overall was the rock and mineral displays. We spent a lot of time exploring that section too. It’s fun to learn about all of the amazing treasures that are created naturally within our wacky little planet’s core. 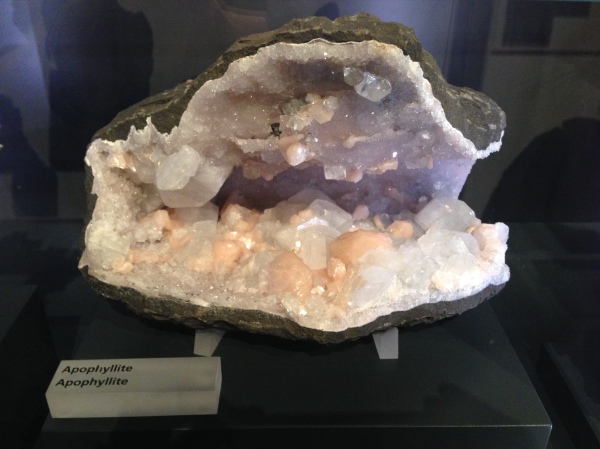 In the natural history section there’s also this really cool place called The Bat Cave. It’s this long and winding dark corridor with all of these caves carved into the walls and fake bats floating around inside. As you walk through the darkened cave you can hear recorded bat sounds for a truly immersive experience. Even though it was hella dark in the bat cave, I was able to use the flash to get a few decent pictures.

One of many exciting crevices in the Bat Cave

Pretending to scale the bat cave walls in my head, naturally

I’ve always loved bats. Some of that love can probably be attributed to my fascination with Batman that started at a young age, but mostly I just think they’re cool. If it was feasible to keep a bat as a pet, I probably would. Freaky people keep snakes and tarantulas as pets right, so what would be so different about having a pet bat? If you could keep it in a special cage and feed it and care for it and love it just like you would a hamster that would be so awesome. For now though, I guess I’ll just have to content myself with the little carved bat statue I bought at the ROM gift shop on my way out.

Neither of us had been to the ROM in a really long time. At least 15 years or more for D, and probably 8 or 9 since my last trip. I loved spending the afternoon walking around the museum with D, just taking in one of the great wonders of our city. It was fun, holding hands and making our own hushed little jokes about dinosaur bones. I’m glad we had the opportunity to shake up our routine and do something different. We should make more of an effort to take advantage of all the incredible things our city has to offer more often. Maybe we will.

But then again, sitting around in our sweatpants watching football later that night was pretty great too. I can have it both ways if I want to.